Regular readers will be familiar with our skepticism here at the Agricultural Biodiversity Weblog about the genetic erosion meta-narrative. Not with the fact that genetic erosion has in fact occurred, and is continuing to occur, of course. Just with the notion that it has occurred everywhere, for every crop, to the overall tune of “75% over the past century.” There’s now news of a further nail in the coffin of that hoary myth.

Brian Ford-Lloyd of the University of Birmingham and colleagues at IRRI1 have looked at data for 12 allozyme loci recorded for rice landrace accessions in the IRRI genebank collected every year from 1962 to 1995. That’s 12,972 accessions, for 5,641 of which there is information on the year of collecting (otherwise the year of acquisition by the genebank was used). The countries covered were Bangladesh, Cambodia, India, Indonesia, Lao PDR, Philippines, Taiwan, Thailand and Vietnam.

Brian and his colleagues found no differences in genetic diversity among sets of accessions collected in different years. Year in, year out, from 1962 to 1995, the rice landraces collected from these nine countries in SE Asia showed the same levels of allelic richness and evenness, at least as measured by allozymes. This is how the authors summarize their findings:

Analysis of this large, geographically and historically broad dataset has not revealed any consistent change or decline in the actual genetic diversity of traditional rice landraces in use by farmers over a 33-year time period, notwithstanding the release of the cultivars IR36 and IR64 for example, and their cultivation over millions of hectares, leading to zero diversity in those areas because of essentially monoculture.

There’s no graph in the paper, but I did one myself based on their Table 3, which shows diversity measured as richness (A) and evenness (He) in ‘populations’ of unequal sizes composed of accessions collected in different years. 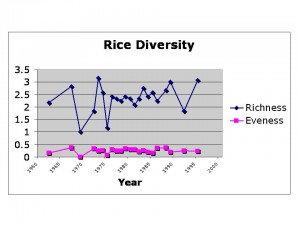 So what’s going on?

Firstly, this clearly does not support an otherwise entirely plausible proposition that early on in the history of collecting rice, collectors only visited the locations where the greatest diversity was to be found, and subsequently visited areas that were less diverse. Another possibility is that collectors have been revisiting locations with high diversity rather than attempting to explore new areas. This would seem to be unlikely given the available collecting information and the geographic extent of collection, but if true, further indicates the absence of genetic erosion.

As Sherlock Holmes said, when you have eliminated the impossible, whatever remains, however improbable, must be the truth.

Because the ‘population’ samples that we have used represent ‘snapshots’ of the rice being grown in farmers’ fields, it may be possible to conclude from our results that genetic diversity in rice maintained in situ on-farm has in fact continued to survive throughout South and Southeast Asia for the 33-year time period covered by our study (although we have not been able to include in our study the many new landrace collections made since then by IRRI), although the actual area over which these are growing more recently compared to decades ago cannot be assessed.

So, although we cannot say anything about the period since 1995, or indeed the future, it seems there is not much evidence of genetic erosion in rice in SE Asia for the three or so decades after the start of the Green Revolution. With regard to the future, the data suggest a possible approach to early warning:

The clear association between population size (the number of landrace accessions collected/acquired in any year) and genetic diversity richness validates for the first time the use of ‘number of landraces’ as an effective and simple proxy indicator that could readily be used to monitor the loss from farmers’ fields of genetic diversity over time, provided that regular surveys were to be undertaken.

That supports the strategy used by a recent meta-analysis of on-farm data which used the named landrace as the unit of study. It looks like an effective monitoring system for future rice genetic erosion could be built around regular surveys of landrace names. I look forward to the establishment of a network of twittering farmers and extension agents throughout SE Asia.