Yesterday Hannes, à propos of something else, reminded me of a post I did a few months back about ProMED which asked the question “Why do we still not have an early warning system for genetic erosion?” Today I read about pestMapper — “[an] internet-based software tool for reporting and mapping biological invasions and other geographical and temporal events.” Whose objectives is basically to make a more participatory, Web 2.0-like ProMED. Coincidence? Maybe. Anyway, this is exactly the kind of thing we’ve been thinking here a “global genetic erosion threat reporting and monitoring portal” might look like. Any thoughts? An idea worth pursuing? 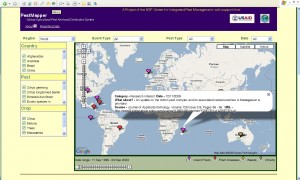 9 Replies to “Reporting threats to agrobiodiversity: A modest proposal”