A recent paper has identified interesting diversity in the wild pearl millet relative Pennisetum violaceum. Out of 305 accessions, a few were found to have resistance to blast (caused by Magnaporthe grisea) and a few others to rust (caused by Puccinia substriata var. indica). Plants from only one accession were resistant to both diseases: IP 21711 from the ICRISAT genebank. It was originally collected in Chad in 1988. It’s the one in red on the map, which you’ll be able to see better if you click on it. 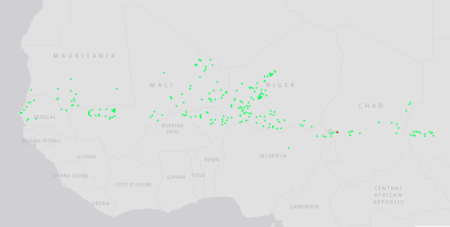 Sometimes it really is like searching for a needle in a haystack. And that’s only the beginning. Pennisetum violaceum is in the tertiary genepool of the crop, so will be tricky to work with.